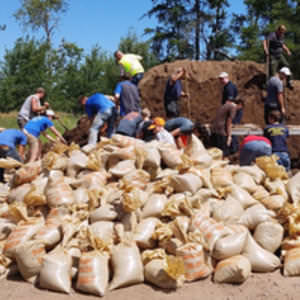 Volunteers filled and placed sandbags to protect buildings and infrastructure in Moose Lake and Hayward on Wednesday as some Northland rivers continued to rise after torrential rainfall earlier in the week.

It was a day of damage assessment and the start of cleanup in parts of the region where the 8- to 10-plus inches of rain that fell late Monday and early Tuesday caused flash flooding that receded quickly. Elsewhere, the level of rivers and lakes crept slowly upward as the day wore on.

“The lake is still rising, the river is still rising — we’re hoping that it will slow down and start heading the other direction here within the next couple of hours,” Moose Lake city administrator Tim Peterson reported late Wednesday afternoon. “There are a few homes that are starting to have water seep up through the basement.”

Community members, city workers and inmates from the state prison facilities in town helped with sandbagging efforts — something that happened four years ago, too, when floodwaters from the Moose Horn River and Moosehead Lake caused major damage in the city.

A top priority was protecting the city’s sewer system, Mayor Ted Shaw reported earlier Wednesday, as runoff from the north funneled into the lake and river.

“If we lose (the main pumps) that can back up into hundreds of homes and creates an immediate problem. … We’ve put sandbags in a ‘U’ around the pump house and put plastic over the sandbags,” he said.

The Minnesota Pollution Control Agency reported that untreated sewage was being discharged into the lake and river on Wednesday at an estimated 450 gallons a minute. Peterson said the release into the river was necessary to bypass the lift stations that pump sewage to Moose Lake’s wastewater treatment plant; the release eases the burden on the pumps to keep them from overheating and potentially breaking down — which would cause larger problems.

Minnesota Lt. Gov. Tina Smith visited Moose Lake on Wednesday for an update on the flooding; she also stopped in Sturgeon Lake and in Aitkin, where the Mississippi River was above flood stage but was forecast to crest a few feet lower than initially forecast. The Carlton and Aitkin county boards have declared local states of emergency, paving the way for possible assistance from the state.

In Moose Lake, the city park, campground and boat landing are closed until further notice. The Moose Horn River feeds into the Kettle River, which crested at 17.73 feet on Wednesday — not far from the record 18.22 feet set in the 2012 flood.

Another Kettle tributary, the Willow River, was causing concern Wednesday in the city of the same name.

The Pine County Sheriff’s Office reported Wednesday afternoon that a voluntary evacuation notice had been issued for the city of Willow River amid concerns about high water at the dam in town.

County Highway 61 in Willow River was closed earlier in the day as a precaution, and the sheriff’s office and the U.S. Army Corps of Engineers were monitoring the dam.

The sheriff’s office stressed that the evacuation notice is “strictly a voluntary measure” and included Willow River as well as areas to the south, including Rutledge.

As of 8 p.m., the sheriff’s office reported that the water level appeared to be dropping slowly, but Highway 61 remained closed.

There was a dam failure during the heavy rain in Washburn County. Part of the levee that held back the waters of Colton Flowage northeast of Minong gave way late Monday or early Tuesday. On Wednesday, where there once was a 47-acre reservoir, there were mudflats dotted with the stumps of trees that were inundated when the dam was built decades ago.

“There’s water running through it, but it’s no longer a lake — it’s a river,” said Joyce Palucci, who lives near the dam.

Palucci said a neighbor measured 12 inches of rain from the storms. Washouts and high water had left residents in the area with few options to drive to town, she said — and there were concerns about whether rising waters might cause more havoc.

Officials were monitoring the Totagatic River as it neared the bottom of the U.S. Highway 53 north of Minong.

To the east, sandbagging efforts were taking place in Hayward on Wednesday, along Smith Creek north of downtown, according to state officials. The Sawyer County Sheriff’s Office reported Wednesday night that U.S. Highway 63 was closed in Hayward, along with several other city streets.

Preliminary estimates provided by Sawyer County to the state reported $365,000 in damage to infrastructure — roads and bridges — and about $70,000 total in damage to 15 homes.

Douglas County reported about $600,000 in infrastructure damage to the state.

Countywide estimates from Bayfield, Ashland and Iron counties were not yet available on Wednesday. But the damage just at Saxon Harbor in Iron County, where floodwaters destroyed a marina and claimed a life, was estimated in the millions of dollars. The Wisconsin Department of Natural Resources has surveyed the damage at Saxon Harbor, and the U.S. Coast Guard was patrolling the area to monitor stranded and swamped boats, state officials reported. Gov. Scott Walker has toured the damage and met with local officials.

U.S. Highway 2 remained closed between Ashland and Hurley on Wednesday; Wisconsin Emergency Management reported that the National Guard helped transport five patients by helicopter from the Bad River Reservation to a dialysis center in Ashland. Gas and electricity service to the reservation was in the process of being restored.

Other highways still closed Wednesday because of washouts included State Highway 13 between Mellen and Ashland; U.S. Highway 63 near Grand View; and State Highway 35 north of Danbury.

The National Park Service closed all of its river landings along the Namekagon River, as well as the St. Croix River north of Highway 70, because of the rising water and debris.

Chequamegon-Nicolet National Forest officials reported that flooding caused significant damage to roads and facilities in parts of the forest, and the Beaver Lake Campground near Mellen and the St. Peter’s Dome-Morgan Falls area are closed until further notice.

A road and area closure is in effect for parts of the national forest west of Highway 13, north of Highway 77 and east of Highway 63. Find more information at fs.usda.gov/CNNF.