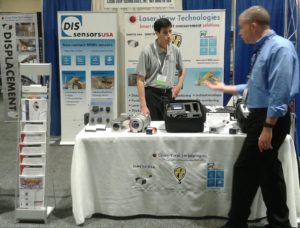 Laser-View Technologies’ booth at The International Bridge Conference® (IBC) is now open. Register today and join us at the show in Booth 117 at the Gaylord National Resort & Convention Center, National Harbor, MD. The Conference began earlier today and will be open until Thursday the 14th of June. We hope to see you there!

The International Bridge Conference® (IBC) is the pre-eminent arena for the bridge industry in North & South America, Europe, Australia, Asia and Africa. Presented by the Engineers’ Society of Western Pennsylvania, the IBC annually attracts over 1,200 bridge owners and engineers, senior policy makers, government officials, bridge designers, construction executives, and suppliers from throughout the United States and abroad. Now in it’s 35th year as an annual conference, the 2017 participants came from 48 states and 17 countries. The IBC is planned by an all-volunteer group and provides continuing education and networking opportunities to members of all facets of the bridge industry.