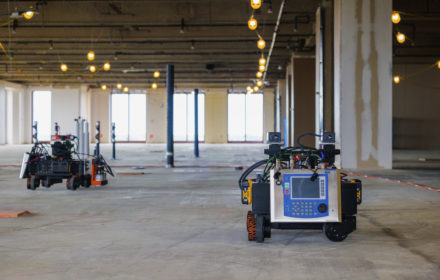 Check out these cool robots! Brasfield & Gorrie, LLC recently teamed up with Rugged Robotics to pilot a new robotic layout technology. They tested them on a hotel construction site in Dallas, TX (featured in the image to the right). The successful completion of this test allowed both companies to identify additional opportunities to use the robotic rovers on other job sites.

Terry Russel, the superintendent on the job site that hosted the Rugged Robotics pilot, estimated that the layout that took the robots 4 days to complete would have taken two or three times longer using traditional methods. Typically, the field layout process uses various tools to complete these tasks such as:

By using the robots, they were able to automate the process and print information more quickly than people would have been able to. The robots also offer the added benefit of being able to help eliminate potential oversights and errors humans could make during a manual layout.

We of course are extra excited about this project because the robots are equipped with Dimetix lasers from Laser-View Technologies! Isn’t that cool? We certainly think so!