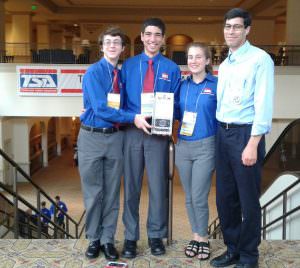 Over 40 teams descended on the TSA National Conference in Orlando, Florida on June 21 – 25, to battle for the national title. Participants squared off in the “Starstruck” competition developed by VEX Robotics Inc. and TSA. At the end of the competition VEXMEN Team 91C Cyclops were named National Champions in dramatic come-from-behind fashion by winning the Excellence Award, the highest award presented in the VEX Robotics Competition.

The Excellence Award is awarded based on three evaluation components: Driver Skills, Programming Skills, and engineering design process. The recipient of this award is the team that exemplifies overall excellence in building a well-rounded VEX robotics program. This team excels in many areas and is a shining example of dedication, devotion, hard work and teamwork. As a strong contender in numerous award categories, this team is recognized for building a quality robot and a “team” committed to quality in everything that they do.

The TSA National Conference concludes the 2016-2017 season. Team 91C will now concentrate on planning for the 2017-2018 VEX Robotics season.

Team 91C Consists of Nick Lubeck, Alexandra Lehman, and Logan Schoffstall, who have been competing together for as many as 7 years. During their time together they have competed in multiple national and international competitions and have won awards at every level.

About The Technololgy Student Association (TSA)

The TSA, formerly AIASA, is the oldest student organization dedicated exclusively to students enrolled in technology education classes grades K-12. It has a rich history that spans nearly four decades.  The TSA is a national, non-profit organization of middle and high school students who are engaged in science, technology, engineering, and mathematics (STEM). Since TSA was chartered in 1978, almost 4,000,000 student members have participated through challenging competitions, leadership opportunities, and community service.

The Laser-View family of companies, including DIMETIX USA and DIS Sensors USA, proudly sponsors the VEXMEN 91C Cyclops team with the goal of promoting continued awareness and interest in the Downingtown, PA, Science, Technology, Engineering, and Mathematics (STEM) program and the importance of educating future engineers.